These are the teams formed during the KOGEI HACKATHON 2017. 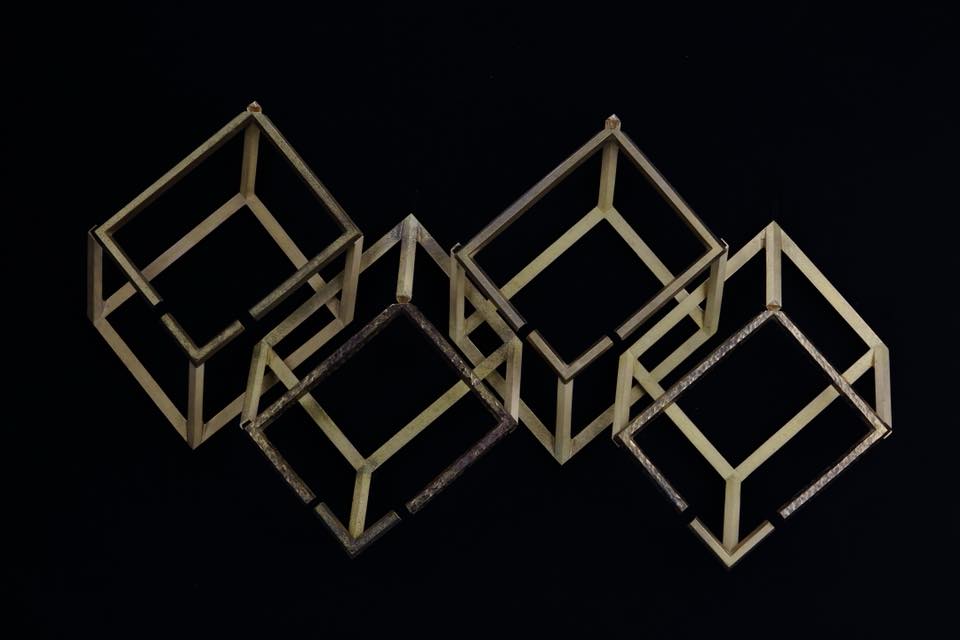 Takaoka copperware is made from a variety of copper alloy materials including brass, bronze and karakane (bronze from China). Copperware artisans are well versed in the properties of each material, and know which to use for different products.
The Sozaicho team believes materials are what elevate the handcrafts into exquisite works of art. So rather than being product designers, the team see themselves as the creators of materials that design the appearance of an item. By making the materials the media for their work and creating opportunities to learn about the materials and techniques used in Takaoka’s kogei, the team has created a conceptual musical instrument that is intended to be actually used and become timeless through the virtue of continuous use.
The team focused on brass (an alloy of copper and zinc) for this project, and used three types of materials with different combination ratios of copper and zinc. They were seeking a shape that emphasized the sound variations of how each material reverberates. The team used frequency analysis and other methods to test the sound reverberation of 53 different materials and shapes in total: including cylindrical, circular, and triangular forms.
The result of their concerted efforts is an aesthetically beautiful prototype with an add-on unit structure, in which one model can be turned around 180 degrees and lined up to connect with other models. Made from two types of materials, where each material is either forged or left as is, the instrument can even be tapped on the sides to produce a range of sounds. The team will keep working on creating an even richer variety of sounds by using even more varied materials. They’re also aiming to have the instrument used in musical performances and other events. 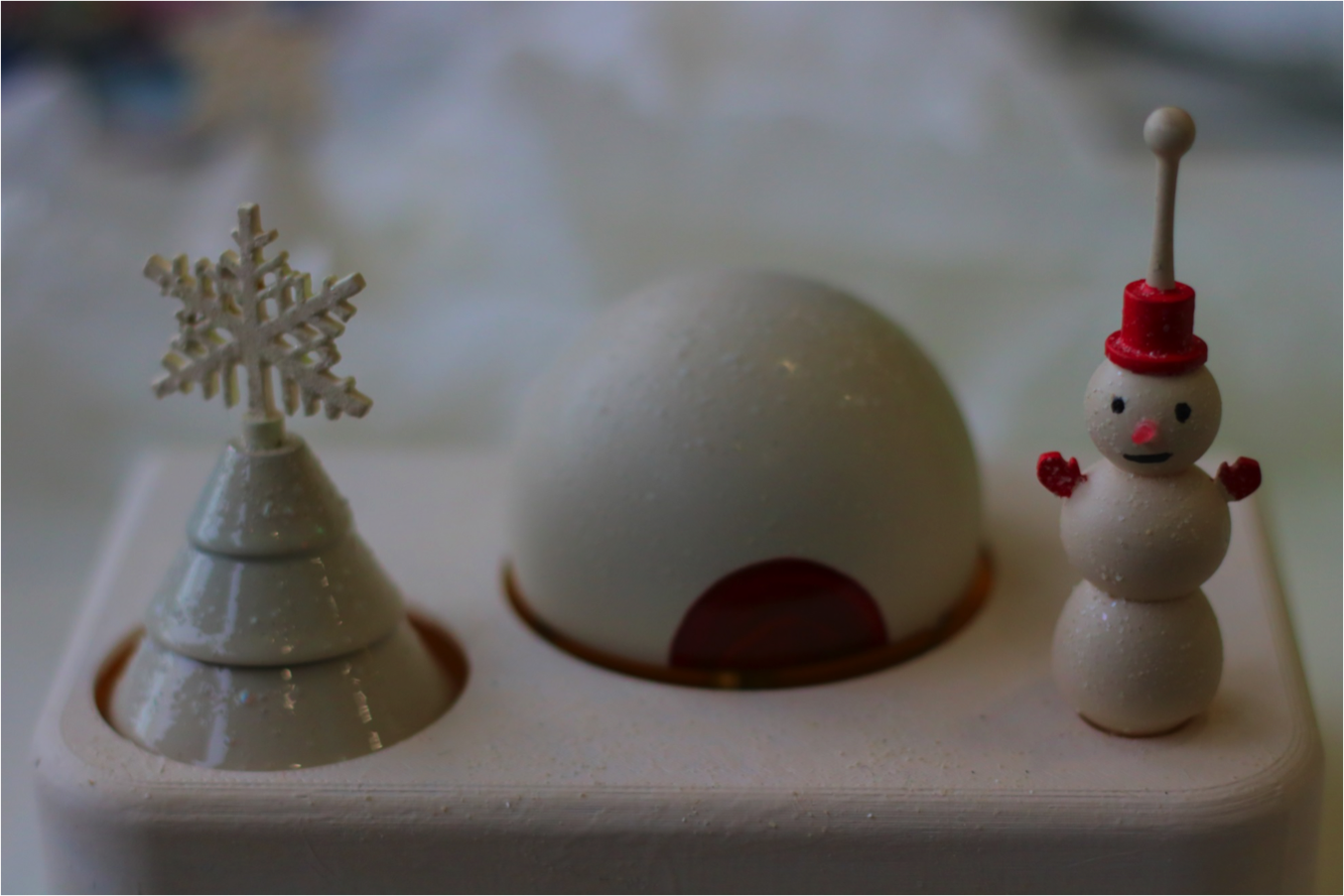 Traditional Craft x IoT: Yui-ne will convey your feelings to those you hold precious.

Takaoka City in Toyama Prefecture is known as the home of Buddhist altar articles (butsugu), as 90% of the production of these objects, in Japan, is concentrated there. One such item is the orin (Buddhist bell), which comes in variety of versions each with their own distinct sound. Yui-ne combines the healing sounds of the traditional craftwork orin with the Internet of Things (IoT). The family unit is becoming increasingly nuclear in its composition; it is now also more common for family members to live apart from each other. Although there are numerous ways for people to keep in touch, wouldn’t it be wonderful if there was a simpler way to communicate and feel the other person’s presence with you at all times?
When you tap Yui-ne and it chimes, the matching pair Yui-ne, that the other person living away from you has, will also chime at the same time. You can both set your own pattern of sounds, for instance one chime can mean “good night”, and two chimes can mean…? Hearing the soothing sounds made by a Takaoka orin, made using techniques to make the most of the appealing sounds of the metal object being tapped, not only relaxes you, but it will also remind you of the other person with the matching orin.
Yui-ne is a system implemented by an embedded solenoid (electromagnetic operating mechanism), microphone, microcomputer and a wireless communication device; the team has already applied for two patents for this system, and they are now working on developing Yui-ne for actual commercialization and sale. The system on which Yui-ne operates can also be used for other applications, such as, allowing customers to call for staff at restaurants or keeping time during presentations, and it can also be operated using a smartphone. 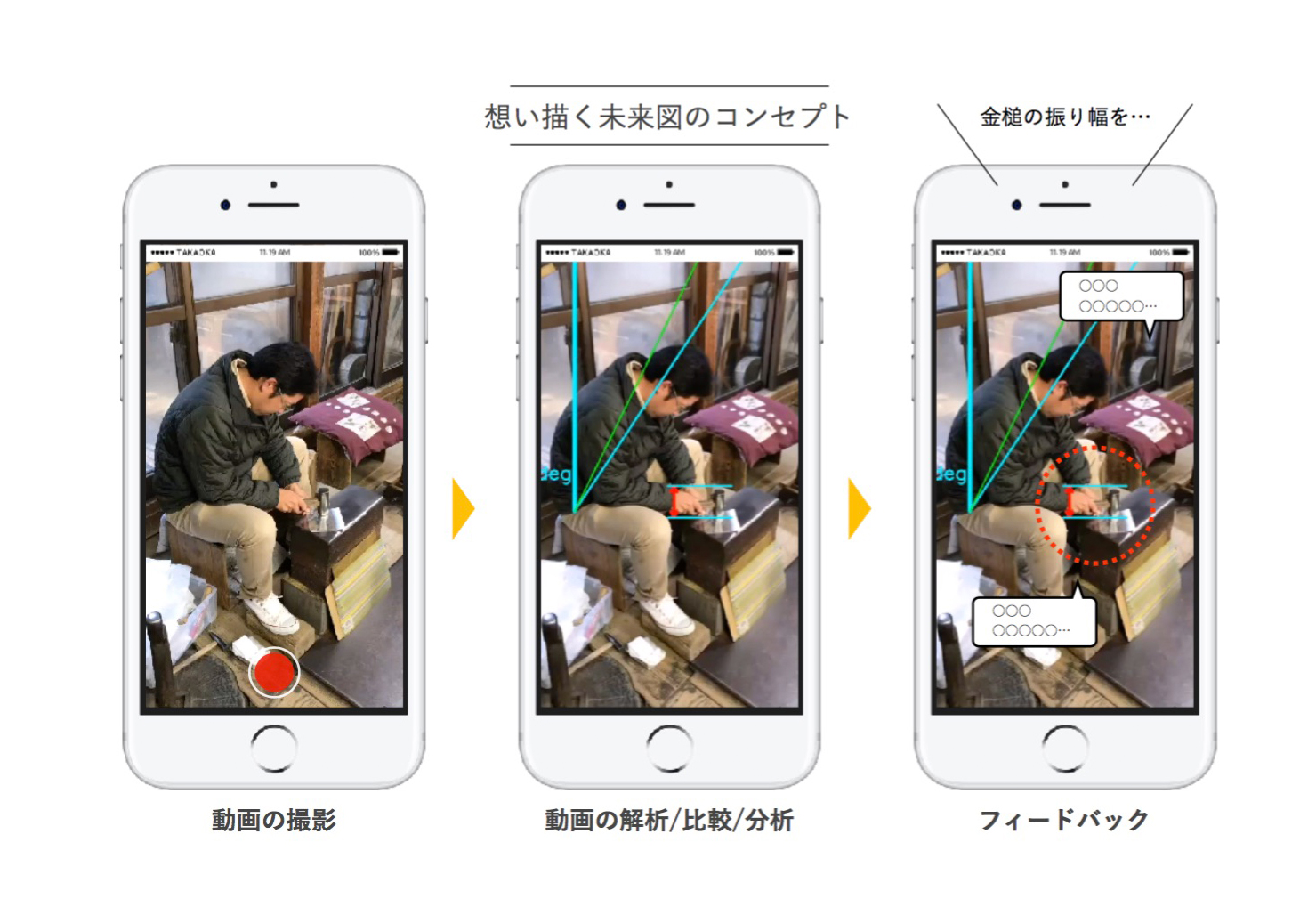 A video analysis system for carrying on traditional techniques, born from a desire for the future to continue creating crafts that move people.

It takes a considerable amount of time to learn a particular craft technique, so young people these days see traditional craft as being a difficult industry to dive into; this has led to a serious problem of a lack of successors in the traditional kogei industry. It would be very difficult and close to impossible to regain these techniques once they have been discontinued; therefore, preserving and passing them on is a pressing issue.
This project aims to let users learn craft techniques in a short period of time by observing and analyzing videos of artisans at work to study their embodied knowledge of craft skills, which is often difficult to describe in words and hence subsequently challenging to pass on. The futuristic concept it proposes is allowing users to record the videos on a smart phone, so that anyone can easily receive the study results; this is made possible by the latest artificial intelligence (AI) technology.
Specifically, the team films a veteran craftsperson and an apprentice at work, and then studies and compares the footage to identify differences in each person’s posture and actions. The apprentice can view the footage to learn how he should move his body while working, in order to eliminate any differences between his and the veteran’s work styles. The project focused on the three areas of polishing, engraving and hammering, and it was clear the apprentice had notably changed and improved his work style by viewing the footage. The veteran artisan also became more aware of his movements after being able to objectively see the way he works via the footage.
The team is currently collecting more samples to create a database, and also aiming to develop an app.
WEB : http://gijutu-keisho.com/ 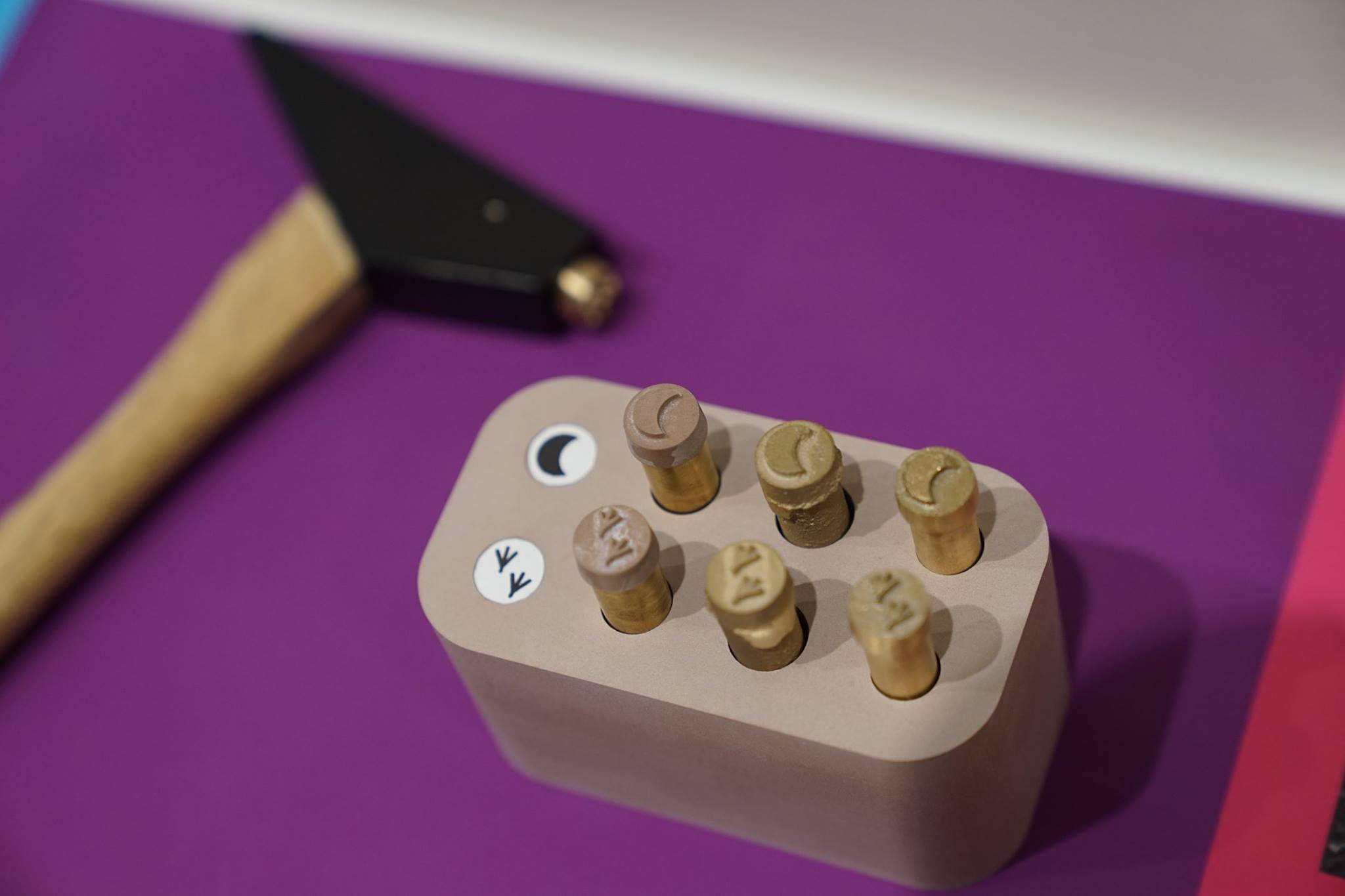 This project began with a desire to convey to more people the wonderful techniques of traditional craft and the charismatic craftspeople of the kogei industry. Connecting traditional craft with contemporary techniques attaches a story to the product, and also helps to set up a made-to-order system for creating such items at a reasonable price. The new product proposed by this project aims to do that by allowing users to take part in the manufacturing process.Suzugami (tin paper) is created by highly-skilled artisans, who tap and shape it into the Buddhist altar article “orin” (Buddhist bells). Tapping the soft metal sheet made of 100% tin improves the strength of this highly malleable and unique product that has become extremely popular. Tonton Toyama is a service and support system for providing made-to-order suzugami with customized designs. The customer uses the Internet to specify their preferred design for the head that is inserted in the hammer, and thus forming the base for the digital fabrication and traditional casting techniques used to create an order-made iron hammer and suzugami. This service also films the casting artisan creating the specified head for the iron hammer, and the craftsperson who uses the completed head to hammer the suzugami with the chosen design. This allows the customer to see how their customized item is being made. The customer can then gift the originally designed suzugami to someone special or share the video of it being made, both of which will help to further spread the service. The team is aiming to keep the order-made service price within a reasonable range (around 10,000 JPY) by standardizing, to a certain extent, the manufacturing of the hammer head and filming process. 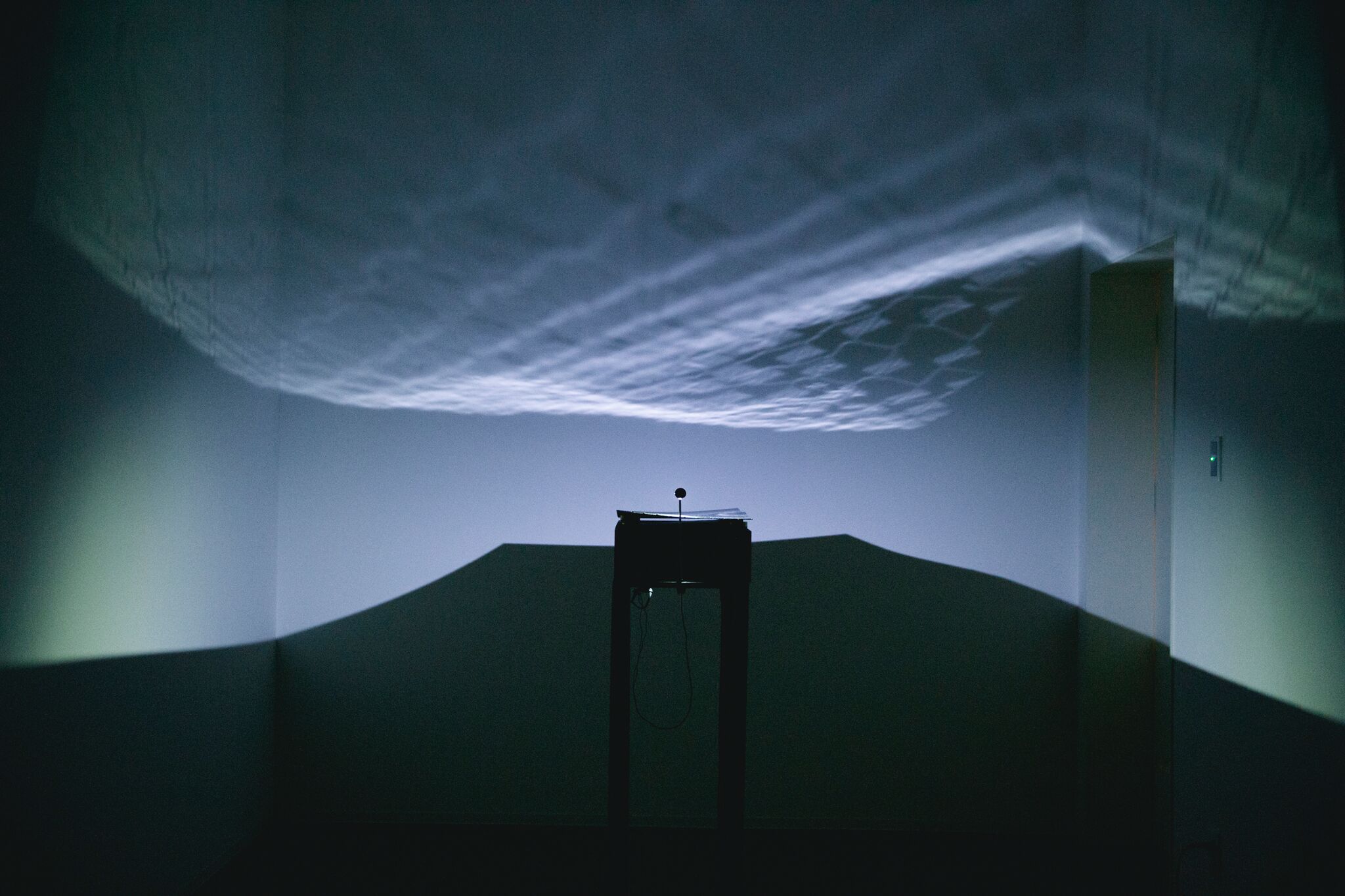 CRAFTECH is the fusion of kogei with state-of-the-art technology, based on Japanese aesthetics

Amid the fears over artificial intelligence (AI), 3D modelling and 3D printers, robot arms and other computer technologies taking away work from artisans, this project searches for completely new expressions of metalwork by daring to incorporate computer technologies into kogei.
Kogei is a by-product of the intentional hand crafting of selected materials chosen for their properties. The Metal Research Lab team interposed algorithms, simulations, data analysis and other computer technologies into kogei in the pursuit of novel modes of expression for metal. Their research followed the two approaches of Latent (computer-generated forms and patterns that are shaped by human hands) and Obvious (using simulation to explore expressions that are difficult to actualize or create by hand).
The Latent approach interposes patterns generated by algorithms into the process for coloring metal, in an attempt to achieve a more intentionally precise coloring texture that has, so far, been largely left to chance. It also interposes geometric shapes generated by algorithms into the process for casting metal, in order to realize the molding of metal using computers and observe the incidental processes that occur during it.
Using these approaches, the team was able to actually create never-before-seen modes of molding, leading the team to the realization that there is still immense potential in exploring and expanding the boundaries of kogei.
WEB : https://www.metalresearchlab.work/ 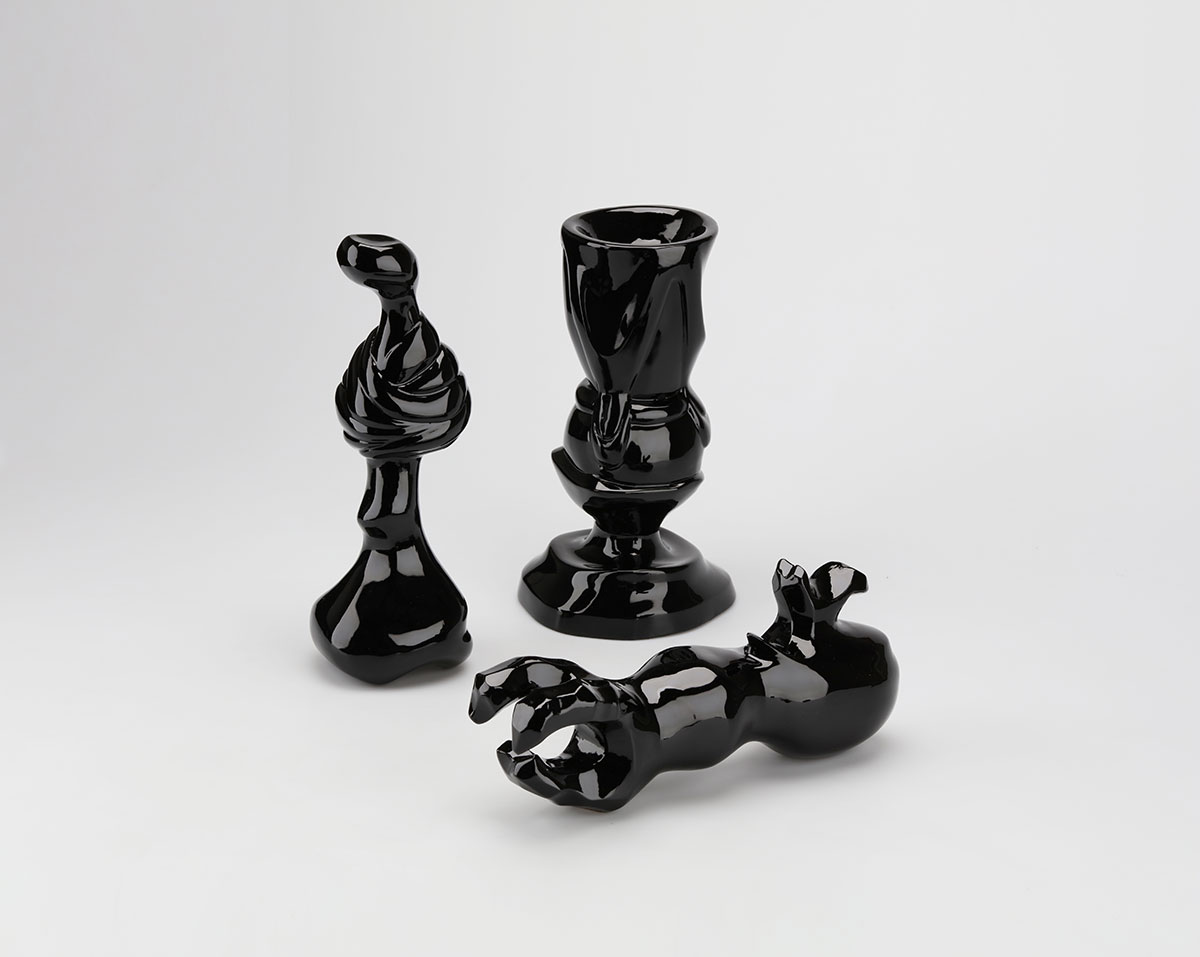 Reconstructing traditional kogei from the perspective of technology

Is it possible to reflect on all that Takaoka kogei has created so far through the perspective of modern technology, and incorporate the DNA of kogei into it?
The ReKOGEI project is utilizing computation and artificial intelligence (AI) to re-evaluate Takaoka’s kogei history and the modelling and construction processes of its craftwork from a fresh perspective. It aims to create new expressions for Takaoka’s craftwork, and generate more possibilities for developing the kogei industry.
The first stage of the project focused on the use of AI as a " neighbor who gives an unexpected reply,” although AI is generally described as being increased efficiency for or a threat to humans. The ReKOGEI team used AI and worked with artisans to expand the modelling properties of lacquer ware.
This second stage looked at the aesthetic qualities of the lacquer pieces created. The team incorporated 3D modelling and 3DCG to explore the appeal of lacquer from a technological perspective, while also seeking to broaden the potential of modelling and the creative process.